We use cookies to make our site work well for you and so we can continually improve it. The cookies that keep the site functioning are always on. We use analytics and marketing cookies to help us understand what content is of most interest and to personalise your user experience.

It's your choice to accept these or not. You can either click the 'I accept all button below or use the switches to choose and save your choices.

For detailed information on how we use cookies and other tracking technologies, please visit our cookies information page.

These cookies allow us to measure and report on website activity by tracking page visits, visitor locations and how visitors move around the site. The information collected does not directly identify visitors. We drop these cookies and use Adobe to help us analyse the data.

Despite global efforts to eliminate educational disparities between girls and boys, girls in many countries are still disproportionately affected by barriers to learning. These barriers, which exist at the school, community and system levels, are often linked to gendered social norms that limit girls’ ability to realise their right to quality primary and secondary education.

In Ghana, these barriers partly arise from an intersection of economic poverty and social norms. Some households view early marriage as a source of social security. UNICEF estimated that approximately 20% of girls in Ghana get married before their 18th birthday, but the rate can be as high as 39% in rural Ghana.1 Women in Law and Development in Africa (WiLDAF Ghana) reported that 14% of girls aged 15-19 have started to have children, and girls from poor households are nearly four times more likely to be married before the age of 18.2 Some communities still practice exchange marriage - a practice where families engage in mutual agreement or contract for their daughters’ future marriage.

At the school level, girls can encounter physical and sexual harassment from boys and teachers, bullying from boys and issues relating to menstrual hygiene management. All these factors combined can limit or even cut short girls’ educational and life chances.

In response to these barriers, the Making Ghanaian Girls Great! (MGCubed) project, led by Plan International UK and implemented by Plan International Ghana, designed and delivered after-school club sessions to improve resilience and wellbeing among girls, with the ultimate aim of mitigating the impact of these barriers to girls’ education. In this blog, we discuss MGCubed’s club methodology and highlight some of the outcomes that have been achieved through the delivery of these sessions.

The Triangular Club model
The after-school club sessions were a major component of the MGCubed project, alongside remedial literacy and numeracy classes, teacher training, and community training and advocacy sessions. MGCubed used satellite-enabled technology to deliver interactive learning and training content remotely into 72 schools in two regions of Ghana. Using this modality, the club sessions were delivered by experienced Master Teacher Trainers from a central studio in Accra and facilitated by teachers within each classroom, known as MGCubed facilitators. All facilitators were regular Ghana Education Service (GES) teachers who were trained for this purpose.

The club sessions were divided into three components: Wonder Women, Boys Boys and Mixed sessions. This approach drew on the existing body of evidence around the critical importance of engaging boys in efforts to tackle gender inequality and shift norms relating to gender stereotypes and masculinity.3 Studies have also found that life skills clubs for both girls and boys are effective in improving participants’ self-confidence, supporting resilience and contributing to more gender-equitable attitudes.4 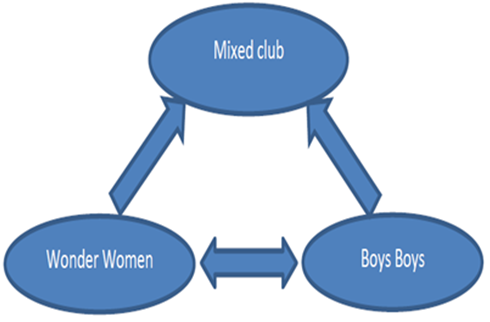 Wonder Women sessions were attended by girls and provided an opportunity to discuss issues relating to gender norms and sexual and reproductive health, including pregnancy, sexual and gender-based violence and early marriage, and to build financial literacy and communication skills. MGCubed also invited role models from different social and professional spheres including academia, business and the public sector to attend some Wonder Women sessions to share their life experiences and encourage the girls in their professional aspirations.

At Boys Boys sessions, boys were encouraged to discuss similar topics to those covered in Wonder Women sessions and to challenge negative stereotypes of masculinity. The Mixed club sessions were an opportunity for boys and girls to discuss these topics with each other while also developing a sense of solidarity and building positive relationships.

The three-club model allowed the project to adapt club content based on issues raised by the participants at the other clubs, so that learning from one type of club supported the learning objectives of the others. Discussions at Wonder Women clubs relating to bullying or harassment, for example, informed the content for the following term’s Boys Boys clubs, and vice versa, while issues raised at both the Wonder Women and Boys Boys clubs were used to feed into the design of the Mixed Club sessions. For example, in instances where boys teasing and harassing girls was identified as an issue affecting participants, this topic was prioritised in the Boys Boys session content. This multi-directional feedback loop enabled the clubs to ‘speak to each other’, ensuring the content was responsive to the needs and experiences of both girls and boys while also supporting participants to reinforce and consolidate their understanding of the topics discussed at each of the clubs.

The impact of after-school club sessions
Since the start of the project in 2017, 62% of project beneficiaries have benefitted from the club sessions. Approximately 5% of all the girls who have participated in the club sessions are young mothers. The clubs are also attended by children with disabilities and the techniques used during the sessions are inclusive and participatory, involving group activities, songs and games.

“For the mixed club I am always in a hurry to go because I love the way we are being taught to understand.”
Girl in Oti region, Ghana

Through testimonies from girls, boys and caregivers, the project’s after-school clubs have been identified as an innovative and effective mechanism for challenging the root causes of harmful gender norms, shifting gendered attitudes amongst girls and boys, and improving girls’ self-confidence and self-efficacy. The Endline evaluation report has revealed more detailed findings about the impact of the club sessions, some of which are highlighted below:

Positive shifts in gender relations: The clubs have brought about a shift in boys’ perceptions of girls and have led to more equitable gender relations. In the Endline evaluation, caregivers, teachers, boys and girls independently reported that boys have started taking on more responsibility for household chores due to the influence of the project. One boy said, “the clubs have shown to us how some girls have gone to school to become great people such as doctors and engineers”. Another boy said, “we have been enlightened… girls are not meant for the kitchen. So, the boys no longer look down on the girls.” Some boys also mentioned that the clubs had led to an increase in their respect for girls, and that girls could hold the same roles and responsibilities as boys: “I thought girls are not important, but the mixed session has changed that perception.” The clubs also helped girls and boys to feel more comfortable to develop respectful friendships, and, in the Endline report, 90% of girls reported having friends of the opposite gender who they play with at school.

Sexual and Reproductive Health and Rights: The clubs supported girls to strengthen their understanding of SRHR issues. By the end of the project, most girls were aware of their sexual and reproductive health and rights (SRHR) and how STIs like HIV are transmitted. This is, in turn, linked to higher school attendance. The Endline evaluation reported that girls with a better understanding of SRHR attend school more often than girls whose SRHR knowledge is limited.

School attendance: There is a clear improvement in school attendance among girls who attend after-school club sessions as compared to those who do not. On average, girls who were members of a Wonder Women club had higher net attendance rates (96%) than girls who were not members (91%). In addition, 75% of young mothers who attended club sessions were found to have school attendance rates similar to those who are not young mothers, indicating that their attendance also averages around 95%. As higher attendance is linked to improved learning outcomes, participation in the clubs was found to enhance girls’ wider experience of school and support both wellbeing and learning.

Building on the benefits of the club model
In conclusion, the after-school club sessions have proven to be one of the most impactful interventions of the MGCubed project, supporting girls’ wellbeing and attendance, fostering positive relationships between boys and girls, and challenging harmful stereotypes. MGCubed schools have shown strong interest in continuing with the club session component of the project beyond its scheduled closure in January 2022. The project is now assisting these schools with all the available resources to ensure they succeed in their attempt to continue delivering club sessions.

2. Women in Law and Development in Africa (WiLDAF Ghana) (2014). Scoping study for Parliamentary Advocacy Programme on Combating Early and Forced Marriage in Ghana